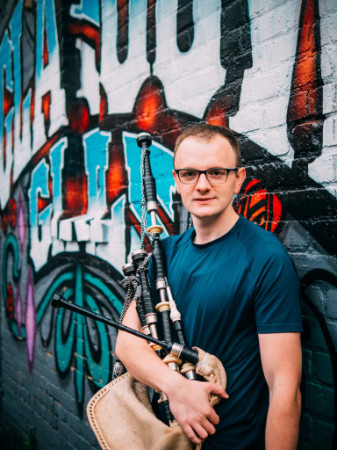 Piper Eddie Seaman has almost finished recording his album for Greentrax. This is a very talented young musician who studied at the Royal Conservatoire of Scotland in Glasgow between 2009 and 2013, was a member of the award-winning band Barluath and currently coaches the Preston Lodge High School Novice Pipe Band. He is also in regular demand as a piping teacher and solo performer. We cannot wait to hear Cave Of Gold, to be released on 1st November.

Dr Fred Freeman is currently putting the finishing touches to the much anticipated Hamish Henderson Tribute Album vol 2 - Ballad Of The Banffies. The principal singers are Fiona Hunter (Malinky), John Morran (Deaf Shepherd) and young singer Cameron Nixon (who appeared on Malinky’s album Handsel), plus a song from the late Hamish Henderson himself and poems read by Fred.

The BBC TV series Vigil commences on Sunday 29th August with actors Suranne Jones and Martin Compston in leading roles. The late Iain MacDonald’s recording of his own song The Iolaire is included in the series - watch out for this. Iain recorded two albums for Greentrax, Beneath Still Waters (which includes The Iolaire) and This Land Once Was Free, both available as downloads/streaming.

Ian Green’s Pick Of The Month is Nick Keir 1953-2013 - a double album reflecting the talents of Nick Keir. This is a double CD collection for the price of one, already making it great value, but there is also a £1 discount throughout September.