Scots In The Spanish Civil War - ¡No Pasaran! - On Stage At Celtic Connections 2013 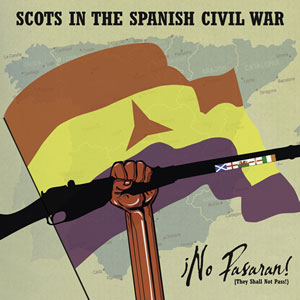 This concert is now sold out.

Greentrax is proud to announce that Donald Shaw is including a stage presentation of ¡No Pasaran! - Scots in The Spanish Civil War in the Mitchell Theatre, Glasgow on Sunday 20th January 2013, as part of the Celtic Connections festival. Greentrax has invited Ian McCalman to act as musical director, a position he has revelled in with the Far, Far From Ypres series of concerts. Ian has accepted and we are looking forward immensely to this concert.

Artists appearing will be: Dick Gaughan, Alison McMorland and Geordie McIntyre, Christine Kydd, Arthur Johnstone with Brian Miller, George Archibald with Charlie Milne and Donald Hay, Carlos Arredondo, Frank Rae, The Wakes, Gallo Rojo and Liederjan. The McCalmans, who of course have now retired, learned Peatbog Soldiers from Liederjan so Ian thought they would make a good replacement for the concert.

Most of the songs on the album, plus some others, will be performed in the concert. In addition, Iain Anderson of BBC Radio Scotland will read the Bob Cooney poem and Daniel Gray, author of Homage to Caledonia, will tell us something of the Scots who fought in the conflict against the fascists.

There are fifteen songs and a poem on the album. Ian McCalman got behind the new project and recorded six of the songs, including: Dick Gaughan’s unbeatable version of Jamie Foyers; Christine Kydd - Si Me Quieres Escribir; Eileen Penman with Tom Ward - Graves In Spain; Robin Laing with Steven Polwart - Picasso Paints Guernica; Alison McMorland and Geordie McIntyre, accompanied by piper Allan MacDonald - Viva Los Brigadistas. Ian McCalman searched his archive of multi-track tapes of McCalmans recordings and unearthed The Peatbog Soldiers, recorded live in 1979 by the original lineup of Ian, Derek Moffat and Hamish Bayne. It was originally adopted by The International Brigaders as their marching song.

Edinburgh’s Gallo Rojo recorded the high energy ¡No Pasaran! sung in Spanish. The poet and author Alistair Findlay submitted a poem late in the production of the album - When The Call Comes. Ian McCalman put music to it and enlisted the help of George Archibald to sing it. The poem – Hasta La Vista Madrid – by Bob Cooney was read and recorded by Iain Anderson.

We have received numerous complimentary phone calls and emails from radio presenters and customers who had so enjoyed the album that they found time to let us know, including one presenter who has played the late Jim Brown song several times.

A launch of the album was held in Barioja Tapas Bar in Edinburgh on Sunday 28th October 2012, when the absolutely packed bar was treated to songs by many of the artists on the album, described as a very memorable occasion by several.