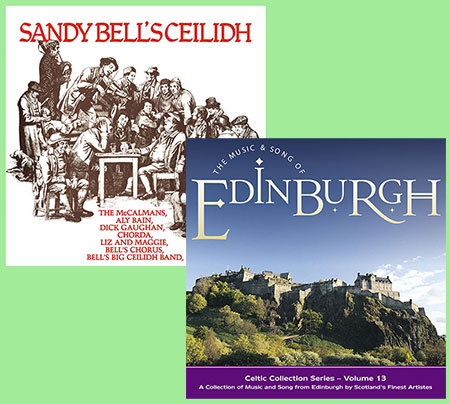 Buy both of the above albums together for £10 (includes UK postage and packing, limited time offer). 34 tracks in total.

Sandy Bell's Ceilidh is an album from the 1970s which was recorded in Edinburgh's famous folk music bar Sandy Bell's - The Forrest Hill Bar. Many of the Sandy Bell's Bar regulars of the time feature on the album, including Aly Bain, Dick Gaughan, The McCalmans, Chorda, Liz & Maggie Cruickshank, plus The Bell's Big Ceilidh Band - local musicians who regularly played music in the Bar - and The Bell's Chorus - regulars who frequently broke into song in Bell's!

The Music And Song Of Edinburgh is a collection of music, song and one poem from Edinburgh by Scotland's finest artistes. Some of the songs catalogue important historical events while others paint a picture of the many interesting aspects of the City and others are simply humorous observations. There are also some fine instrumental pieces played on pipes, fiddle, concertina and the unusual Jaw Harp.

Heading to the Edinburgh Festival?

The Acoustic Music Centre - now at UCC, 14 Royal Terrace, Edinburgh - is again one of the venues for Edinburgh Festival Fringe in August. Amongst the many highlights will be a show on 23rd August titled Festival Lights - The Songs Of Nick Keir, presented by The Quiggs, Sangsters and Dick Gaughan. In 2017 Greentrax released A Double Album Reflecting The Talents of Nick Keir.

The concert will be on tour from August to November in various venues around Scotland, and tickets are now on sale at the venues. The final concert will be in the Usher Hall, Edinburgh on 11th November 2018 (Armistice Day). The first concert in Selkirk on 5th August will be filmed, with a view to Greentrax releasing a DVD of the full concert which should be available shortly afterwards. 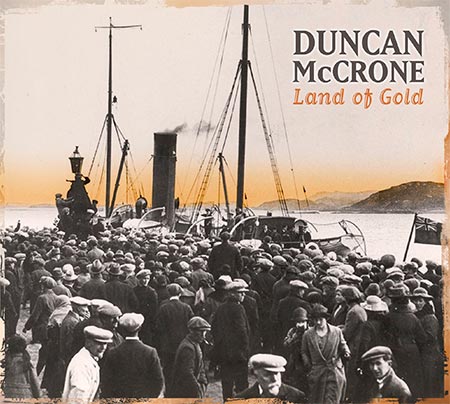 Land of Gold is a collection of contemporary songs by such songwriters as Ewan MacColl, Matt McGinn, Eric Bogle and of course Duncan and his long-time co-writing buddy Cy Jack.